While on tour our guides get asked a lot of questions from our curious guests, and one that we 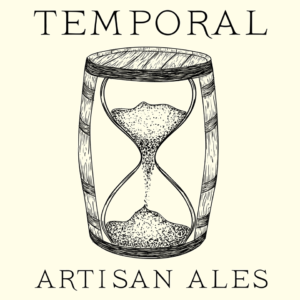 hear often is “how can there be room for so many new breweries in Vancouver?” It is true, our scene has undergone exponential growth in the last 5 years and sometimes it seems like there isn’t any room left for new entrants. But healthy competition between the breweries has been good for the consumer, and it also forces those that are thinking of entering into this competitive market to be truly innovative and stand out to appeal to an increasingly more sophisticated craft beer consumer. With that in mind, we’d like to introduce you to Temporal Artisan Ales, someone who we feel is shaking things up a bit in our local scene.

With an innovative business model and plans to produce some truly unique beers, we caught up with Temporal Artisan Ales Owner Tristan Stewart to learn more about his plans.

So who is Temporal Artisan Ales?
Temporal Artisan Ales is a new brewing and blending project dedicated to 100% oak fermentation. It’s a sole proprietorship, which means I am the one and only owner/brewer/blender. I’ve been working in the craft beer industry in BC for 6 years, which has given me experience working in a variety of roles. I’ve done purchasing for a small craft beer bottle shop, managed a tasting room, been a bartender, and brewed commercially.

What inspired you to start Temporal Artisan Ales?
To put it very simply, my inspiration is the beers that I love to drink. Beers that have a wonderful aged character, developed over time in a barrel or foeder. During my time working in the craft beer industry, I have spent many hours researching market trends both locally and globally. I believe that I can bring something new to our local market by focusing solely on barrel-aged beers.

You introduced the community to Temporal Artisan Ales through an Indiegogo campaign, how was your idea received?
I was blown away by the support of the local community to the crowdfunding campaign. I spent a lot of time organizing perks that I thought people would get excited about, and we raised almost $9,000! I still have people messaging me asking if they can still contribute to the project even though the campaign is over, but it wouldn’t be fair to my backers to extend those perks past the campaign limit.

With that being said, I do still have slots available for membership to the 2018 Cellar Society. The Cellar Society is a yearly membership granting members access to 2 bottles of 6 different exclusive, member-only, larger format beers. There are additional perks to being a member including special glassware, the ability to reserve bottles from regular releases, and first right of refusal on subsequent years membership. If you’re interested in becoming a member you can read more about it on my website and get in touch with me via email.

You are currently brewing and renting space from Luppolo Brewing on Venables, what made you choose Luppolo as your home?
I have been working at Luppolo for about 8 months. I started as a bartender in the tasting room but have transitioned out of that into working in the brewery primarily. The owners are good people and we share the values of quality and commitment to the craft of brewing. It was a natural choice, and since moving into the brewer position I have become very familiar with their brewing process and brewhouse. They also happened to have a nice little slice of warehouse space, nestled alongside their own barrel program, which they were willing to rent to me to help me get started.

We have seen a rise in the number of aspiring brewers partnering with and renting space from established brick and mortar breweries. What is it about this model that you were attracted to?
The main attraction of this type of model is cost. It takes a huge amount of money to renovate a building, purchase a whole brewing setup, fermenters, construct a tasting room, obtain the necessary permits/licenses, etc. By utilizing space in another brewery I was able to cut that start-up cost down to a small fraction of what I would have needed.

In addition to this, my focus is on fermentation and “cold-side” experimentation. I won’t be using the space at Luppolo forever, I would like to eventually take over a warehouse to use as my own production space. I’ll likely never purchase my own brewhouse, I would prefer to buy wort from other breweries that is brewed to my own recipes and specifications, and then take it back to my warehouse for barrel fermentation and aging.

What types of beers will you be producing?
There are two main avenues that barrel-aged beers tend to fall into – mixed fermentation sour and/or funky beers, and strong “clean” beers. Typically the former is fermented in neutral wine barrels, while the latter are usually laid down in used bourbon, rum, or scotch casks. The mentality of using a barrel as an ingredient, rather than just a fermentation vessel, is something that really fascinates me and something that will be prominent in my beers.

Another major focus in my process and finished beers is blending. Each barrel I fill will be getting its own unique set of yeast and bacteria, which means I will have one batch of beer producing 6 different finished beers. This allows me to blend portions of different barrels to “build” a final beer. Blending is somewhat of a lost art when it comes to brewing, with roots in traditional brewing going back centuries.

My cellar of barrels at Luppolo consists of French and American oak barrels, previously containing bourbon, tequila, and different varietals of red and white wine from vineyards in the Okanagan, California, and Italy. The beers I will be producing at Luppolo will be exclusively sour and mixed fermentation beers. One day when I have my own warehouse facility I will expand to brew big clean beers like bourbon barrel-aged stouts, barleywines, etc but the risk of contamination of these clean beers with unwanted sour or funky microbes is higher in such a small area and without additional equipment.

How, where and when will we be able to buy your beer?
I will be releasing the first bottles in early 2018, with a production goal of 3 released beers each month. For the first beers, I have designed the recipes and selected microbes to intentionally have some beers that mature in a shorter amount of time. Due to the nature of these types of fermentations only time will tell when they are ready for packaging and release.

My bottles will be available for sale in the Luppolo Tasting Room, where I will also have one beer on tap at a time. In addition to this I will be sending a very limited amount of cases to a small handful of stores and – if you’re lucky – you might catch a keg on tap in a few very select craft-focussed bars in town.

Any advice for home brewers like yourself who are thinking of approaching local breweries to rent space and do something similar to you?
Nail down your business plan to the best of your ability and have it professionally reviewed. Sit down and talk with a business advisor and figure out how to make it all work. Being a good homebrewer isn’t enough, you will need to learn and understand how businesses are run and be willing to dump endless hours of time into making it all come together. This type of model is not for everyone, and it may be difficult to find a brewery with extra space they are also willing to rent to you.

If this is your dream, stay determined and focussed, work hard, and make it a reality!

How can we follow your progress and get in touch?
You can follow my progress and reach out to me with any questions on social media:

A catalog of finished beers and information about the project can be found on my website, http://www.temporalales.com/