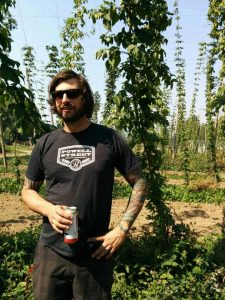 There are a lot of really great stories behind our local craft breweries in Vancouver. Each one is unique and has its own vision, approach to brewing and inspiration behind why it got started in the first place. From James Walton at Storm Brewing finding his brew house in a scrap yard in New Westminster, to local craft beer champion Nigel Springthorpe from the Alibi Room opening Brassneck Brewing, the list goes on.

One of the best examples of a local success story has to be the owners behind Powell Brewery. Celebrating their 4th year anniversary this week, the brewery came from humble beginnings as a husband and wife team with a dream to bring their small batch beers to the newly emerging craft scene in Vancouver back in 2012. Fast forward to 2016 and the brewery has experienced big success and continues to build on their already impressive list of accolades.

Beer of the Year in Canada

The 1st nano-brewery in Vancouver, Powell Brewery opened with a small list of rotating taps including their popular Dive Bomb Porter, Hopdemonium IPA and Old Jalopy Pale Ale. In fact, so popular was the Old Jalopy Pale Ale that after only 6 months of being in business, the small brick lined brewery on Powell St. hit the jackpot by winning Beer of the Year in Canada at the Canadian Brewing Awards in 2013. A HUGE distinction for such a small brewery!
The award brought immediate success to Powell Brewery with the result being line ups out the door (and around the block) and beers selling out at a fast rate. No small feat to deal with as owner and head brewer David had kept his full time job as an architect and was essentially working two full time jobs during this upswing in business.

A New Home for Powell Brewery

Fast forward a few years, and the team has since moved down the street into a much larger facility (4000 square feet to be exact) which has allowed the team to increase their daily tap list, experiment and play with barrel aging, enter the canning and bottling markets with force, and increase the size of their team.

To celebrate their 4th anniversary, Powell Brewery has released a special, limited release beer aptly named “4th Anniversary Ale” to mark the occasion. The beer is a barleywine aged in French Oak Barrels for 18 months with the addition of two strains of Brettanomyces giving the beer a pleasant and funky aroma complemented by flavours of stone fruits and a sherry like finish.

Since joining our tours back in 2015, Powell Brewery has been a popular stop for our guests, and the team at Vancouver Brewery Tours wishes them nothing but the best and continued success for their next 4 years and beyond!