It’s that time of the year again… the season we have all been waiting for… when we are able to welcome back fresh hop beers back into our favourite breweries!

What are Fresh Hops?

You might be asking yourself, “what is the difference between fresh hops and regular hops?” and today, we are here to tell you that there really is quite a substantial difference! For example, regular hops are available year-round because they have been dried and frozen in order to preserve them for use whenever the brewers need them. Fresh hops, or ‘wet’ hops, are harvested as whole flower cones and not dried or frozen at all. This preserves the precious hop oils necessary for making an amazingly fresh tasting and delightfully smelling beer that only comes around once a year.

Hops in the wild

What are the origins of Fresh Hop beers in B.C.?

The first craft brewery to make a fresh hop beer in B.C. was Victoria’s very own Driftwood Brewing back in 2009 with their Sartori Harvest IPA. In fact, the story goes that when Driftwood started making this beer they used to harvest the hops first thing in the morning, then race back to the ferry in order to make it back to the brewery where the brew kettle was waiting to brew a freshly hopped beer on the same day of picking said hops. How fresh is that?! 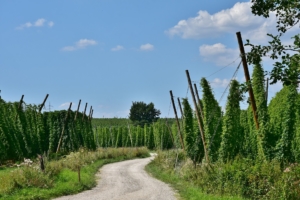 Old Yale Brewing, always the innovators out in Chilliwack, have a fresh hopped beer that has the newly harvested hops thrust into the brew kettle after just 45 minutes! Since 2014 we have seen this delectable beer style explode in popularity with more new breweries jumping on board every year. The next year was also the initial installment of our own fresh hop festival, the B.C. Hop Fest, and it was so successful it has become an annual event. This year, slated to occur again at the end of September. Now in 2018 it seems like just about every brewery has a fresh hop beer in this seasonal style. The number of hop farmers has been increasing rapidly in B.C. to service the growing B.C. Craft Beer scenes thirst for fresh, and regularly provided, hops.

When are Fresh Hops coming to the breweries?

The time is now! Late summer and early autumn is when hop farmers everywhere start to harvest their hops for use in brewing. The fresh hops are meant to be utilized as soon as possible, usually within 24-48 hours, to preserve those fragile oils which produce all the coveted flavours and aromas we obsess about so much. Brewers love to get these amazing fresh hops into their beers, making them super vibrant and fresh tasting while adding pleasant grassy/chlorophyll sensations with a softer hop bite.

You can see a variety of styles like IPA’s, Pale Ales, Amber Ales and Lagers used to showcase the fresh hops. Many of our brewery partners produce fresh hop beers and when hopping (pun intended) onto one of our tours during this limited time, you are certainly in for a treat! Here’s just a few of the breweries where you can expect to see fresh hop beers on tap:

The Rise, Fall and Rise Again of Brewery Creek
Scroll to top