Ratebeer Names Brassneck, Steamworks and Boombox in their Best of 2016 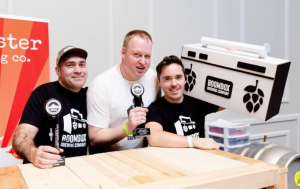 We at Vancouver Brewery Tours are super proud that three of our Brewery Tour Partners made the RateBeer Best Awards for 2016 list this year!

Steamworks, Boombox and Brassneck are all available to request on Private Brewery Tours. You’ll get to sample Boombox when we hit Callister Brewing Company on Thursday’s Public Vancouver Brewery Tour and Brassneck on Saturday and Sunday’s Public Tours. #HopOn
Check out the full list: https://www.ratebeer.com/ratebeerbest/

Millions and millions of times, RateBeer beer reviewers worldwide have raised a glass to review a new beer. We have tallied those scores and now present them as our RateBeer Best competition results.
But before we get to those, I’d like to raise a glass to the people who make the beer we drink. These men and women are the artists, engineers, visionaries, chefs, CEOs and of course janitors and many other roles combined that are today’s craft brewer. I’ve had the pleasure of sharing a beer with many around the craft beer industry and there are no more passionate, skilled, brave and hard working people on the planet. The great success of craft beer around the world is further testament to this.

It’s my great pleasure to honor them, and all those in the craft beer industry, with the results of this year’s RateBeer Best.

Craft Beer and Tacos Tour in the Georgia Straight

Our Valentine’s Day “For the Love of the Craft” Tour Retu...
Scroll to top