If you’ve been looking for the next amazing beer festival to attend, look no further than The Coquitlam Craft Beer Festival! Set to take place on March 9th and 10th, 2018 the popular annual event will be held at the Westwood Plateau Golf & Country Club. 40+ local BC breweries will be participating, which means more than 120 unique beers will be offered! Food from some of the best local restaurants and caterers will also be included in the ticket price. 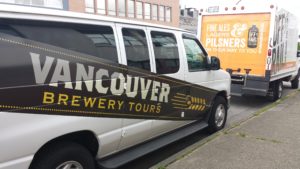 Vancouver Brewery Tours will be providing a free shuttle between the event and the Lafarge Lake-Douglas skytrain station on both dates, so leave the car at home, and no need to worry about a designated driver!

New to the festival this year will be a Cask Corner with a select number of unique casks. Confirmed casks as of January 10th include; A Frame Brewing, Bomber Brewing, Coal Harbour Brewing, Fuggles & Warlock, Off the Rail, Stanley Park, Strathcona Beer Company and Twa Dogs.

Coquitlam got its first craft brewery in September of 2017 when Mariner Brewing opened their doors. Opening soon will be Port Coquitlam’s first, Northpaw Brew Co. Neighboring Port Moody has seen a recent burst of four new breweries since 2014, and the area they reside in is now referred to as Brewers Row.

The Coquitlam Craft Beer Festival is proud to partner with Team Taylor of the The Ride to Conquer Cancer, benefiting the BC Cancer Foundation. There will be a silent auction, as well as a grand prize draw, with 100% of proceeds raised going to Team Taylor, plus different gifts and merchandise from the breweries.